Were there any early signs that Abigail would have an allergy to peanuts? I referenced Dr. Burks in my last blog. He's the Chief of the Division of Pediatric Allergy and Immunology at Duke and oversees all of the clinical trials as well as sees patients (I hear it takes about 6 months or more to get an appointment). We haven't met him on any of our trips to Duke yet. He's been in the news so much lately, that I feel like when I do meet him, I should ask for an autograph or something. Anyway, in a 2006 article, he stated that about 20 percent of babies with eczema or milk and egg allergies will develop an allergy to peanuts by age five.

As an infant Abigail had eczema, and although she was never diagnosed with a milk allergy, she was definitely "intole 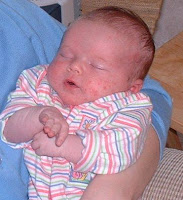 rant". Just look at this picture taken of her at one month. A lot of newborns have red cheeks and acne. She had both. The majority of that cleared up after the first week or so. Then her cheeks got rashy and inflamed. Our pediatrician (at the time) didn't appear overly concerned. I didn't like it because it looked raw and painful. A friend happened to mention that her son's cheeks also looked like Abigail's until they eliminated milk products from his diet. I was breast-feeding so that meant if I wanted to try that, I had to eliminate dairy from my diet. I did, and in a just a matter of days, her cheeks were clear a 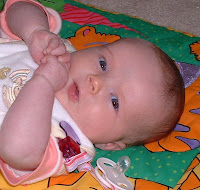 nd baby-soft. Just look at my sweet baby at two months. Assuming that was the culprit, we continued the milk elimination diet when Abigail started formula. We put her on a soy-based formula, and at a year old, switched her to soy milk. She didn't drink cow's milk until around 2 years of age when I started reading that soy was a natural estrogen booster, and we weened her off. At that point, she appeared to have out-grown her sensitivity to milk. She later tested negative to a milk allergy.

In researching for this post, I came across an article published by the Cincinnati Center for Eosinophilic Disorders entitled Interesting Causes for Peanut Allergy Identified. The article sites a study done in southwest England that followed almost 14,000 preschool children for a year. It would take too long to post all of their findings, but here's one of interest:

Okay, so now I'm confused as so many other parents are. One source says there is a link between milk and peanut allergies and another source states that it's soy that is linked to peanut allergies. But just to further muddy the water....read this.

Sydney, June 19, 2008. Parents need not worry about giving their children soy milk or soy-based formula. It is not likely to trigger peanut allergy, according to a new study. “Our results show that their risk of becoming allergic to peanuts … is a myth,” said epidemiologist Jennifer Koplin of Murdoch Children’s Research Institute, who led the research. The article goes on to say that "the new study, however, suggested that the association between soy consumption and peanut allergy is coincidental. It occurs because parents whose children are already at higher risk of peanut allergy - due to a family or personal history of cow’s milk allergy - are more likely to give their children soy." For the record, neither Dave or myself is allergic to cow's milk.

So, maybe I didn't answer my question, but did I absolve myself of guilt? I'm not really sure that I did. But, I did it again anyway. Our second child (who is now 2) also showed a sensitivity to cow's milk. Not wanting to make the same mistake, we tried a Lactose free formula instead of a soy formula which seemed to work for him. However, when it was time to change him to milk, we compared a Lactose-free milk and Silk Soy milk with DHA Omega-3 and calcium and couldn't get over the difference in nutritional value in the Silk. So, yes, we did it again. Nathaniel drank the soy milk for a year before we changed him to the Lactose-free milk. He still is a little sensitive to just straight cow's milk. We've had him allergy tested also. At this point, he tested negative to both peanuts and dairy.

So, if not the soy milk, maybe my daughter's allergy is related to all of the peanut butter I ate when I was pregnant?? That's a topic for another blog.

One other note, we're actually waiting 3 weeks between visits to Duke this time because Abigail has music camp next week. Duke is pretty flexible when scheduling visits. I don't think they'd let us go longer than 21 days though. Until later.

Posted by Mom with a Mission