This is going to be short because frankly, I'm exhausted.  It was a big day for us, but I knew you guys would want to know how it went.

I made a mistake in my timing of telling Abigail what today's visit would entail.  I couldn't tell her too early or she would make herself sick with worry.  She fell asleep in the car right before we got there so I didn't tell her until we were walking into the medical building.  When I told her that it might be the appointment that they do the skin test, I "forgot" to mention that they would draw blood at the same time.  I couldn't exactly carry her through the building to the clinic if she decided she wasn't going to go, right?  Besides, we were already late (I'll get to that in a minute).  She handled it well.  She commented that hopefully it wouldn't be today's visit, but then changed her mind because she had brought two of her Build-A-Bears and thought that was a good thing.

All went smoothly until she found out about needing to draw blood.  I had a time even getting her to agree to put the numbing medicine on her arms.  She obviously hadn't had enough time to process getting stuck.  After a few tears and much discussion, we got the numbing cream on and taped up and then moved on to the skin prick test.  After more hesitation, i.e., lack of cooperation, Dr. Kim was able to do the test.  It really is painless.  He marked her back with a pen in about 8 different places then did a tiny scratch at each place with a different dosage of peanut allergen, one salt water scratch and a histamine scratch.  I believe he said that the salt water scratch was for those patients that have very sensitive skin and/or prone to excema and acts as some sort of measurement standard.  The histamine also serves as a measurement guide.  Dr. Kim explained that her reaction today should actually be worse than her reaction from the baseline skin prick test they did when we started the study.  By dosing Abigail with a daily peanut protein, her body was, for lack of better words, "agitated."  Her body would initially "over-react" to the peanut protein, but theoretically, as she took more and more of the peanut protein, her body should get accustomed to it and stop reacting, or at the very least, react less than the baseline.

While painless, a skin prick test causes major itching and discomfort.  So, with a little hand fan to help with the itching, I was poised and ready.  Nothing happened. Well, almost nothing.  All of the marks got a pimple looking place, and the third scratch mark (not even the strongest dosage scratch) got a little red around it, but compared to the first test back in May, nothing!  As to not excite anyone by thinking that we've already seen a remarkable development after just 4 months, we have to assume that it was a faulty test.  It will be repeated at our next visit.

So far, the trip has not gone very well, and it's now time for the blood draw.  Thankfully, Abigail has had some time to come to the realization that she could be brave or we could call in 4 nurses, but that either way, she was leaving there minus some blood.  First stick wasn't successful, and our nurse had to try her other arm.  Second stick hit the mark, and all was well.  At this point, my very "brave", tearless little girl is helping change out the tubes.  There were 6 in all, and she put on 4 of them.  She swears that it was a piece of cake (minus the first stick that hurt) and that next time will be no big deal.  I didn't bother to remind her that she pretty much said the same thing 4 months earlier.  To give her credit though, at our first visit to Duke her IV needle had to be inserted twice (first time the needle was too large).  She had every right to be unhappy with needing to draw blood today with that experience fairly fresh in her memory.  Our nurse loaded Abigail up with treats, and we were finally on our way home.  Abigail is showing off her two bandages in the picture. 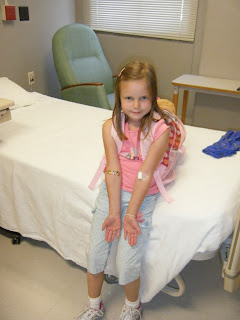 Our 9th visit is over and done with.  Abigail is now taking 4 drops of her solution and will continue to do so every day until we go again, 2 weeks from today.  We've got another skin prick test to look forward to.

Thanks for keeping us in your thought and prayers today.  We made it through the day!  Getting ready for the trip was much easier today, and we got on the road with time to spare.  Not 2 miles from our house though, I dumped almost half a Wendy's tea in my lap, had to circle back, change clothes and clean up the car making us late yet again to our appointment.

You have me tired just reading your posts! Hugs all around, especially to brave Abigail!
love, Susan

Congrats on a successful (albeit draining) visit! Nel entered the study in April and had her first follow up blood/skin prick test in July. The wheels on her back were markedly reduced from the baseline in April. I was very excited. She'll have another blood test visit right before Halloween and I am not looking forward to it! The last time I had to hold her down, which broke my heart. We're up to about the equivalent of 1 1/2 peanuts a day in the flour study.

Wishing continued good luck to you, Abigail, and the rest of your family!