I missed the premier episode of Jamie Oliver's Food Revolution, but thanks to the internet did catch a small segment. It was pretty disturbing. 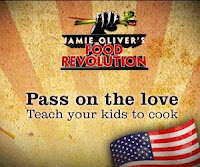 In this clip, Jamie brings in a group of kids to do an experiment. He takes a raw chicken and proceeds to cut off all of the good parts, breast, wings and legs, explaining that this is the best and most valuable part.  Asking the kids if they want the remaining chicken carcass, he elicits lots of appropriate statements of yuck and gross. He proceeds to hack at the chicken, throwing pieces of bone, skin and connective tissue in the blender and makes this nasty pink goo. Again, the kids are all grossed out. Jamie then throws in a handful of "stabilizers" and "artificial flavors", makes small circle patties, dips them in breadcrumbs and drops them in a fry pan. When they're ready, he puts them on a plate and asks the kids who wants to eat them.  He is absolutely dumb-founded when all the kids raise their hand and say "ME!"

We're fooling ourselves if we don't think that kids are "programmed" to want certain foods based on what they see on TV, how the food is packaged or what shape it is.  The square organic cheese crackers don't meet with as much enthusiasm as the cheese crackers shaped like fish.  The cereal in the white "boring" box can't possibly be as good as the kind printed with rabbits, Leprechauns or other annoying characters.  And in Jamie's experiment, the kids were willing to eat the nasty pink goo because it was put into a shape of a nugget.

My kids love chicken nuggets, and they're perfect for those evenings when they need something quick.  Right now, I'm buying the Yummy brand, 100% All Natural Chicken Breast Nuggets.  There's no hormones or preservatives in the white meat, but they do have 23 other ingredients, i.e., "minimally processed."  I've found an organic brand, but Abigail doesn't like them meaning she's not going to eat them.  So, why spend the money?  After all, they're not cheap!  Does this mean I'm going to have to now start making chicken nuggets?  I don't want my kids eating pink goo.  I found this video clip on how to make chicken nuggets. Doesn't look too bad.  I could make a bunch and then freeze them...in my spare time!
Posted by Mom with a Mission

Oohhh, we could do this easy! Let's have a chicken nugget/tender making party! I would even eat these.

Mom with a Mission said...

I can hear it now. "What did you do last night?" "Well, I got together with my best friend for a glass of wine...oh yeah..and we also made homemade chicken nuggets!" Ha! Is this what eating healthy has come to?:)

But, if it's an excuse to get together with my best friend and drink a glass of wine, then I'm up for it!!