Not your normal birthday cake!

Today is my husband's birthday.  With it being so close to Christmas, his birthday is often spent doing holiday related activities and today was no exception.  It's a very busy weekend with both kids participating in a holiday music concert last night, our community Christmas parade today and tomorrow both kids are singing in two different church services, we have an Advent festival to attend and a Christmas tree to purchase.  Somewhere in all of that, we have to find time to have a family birthday party.

I spent this morning making a special request cake.  It wasn't your normal birthday cake.  He asked for a chocolate marble cheesecake.  I've never made a cheesecake before, but because I often feel like I short-change him on his birthday, I figured it was the least I could do.  I also don't think he realized what an undertaking it would be.  I chose a recipe (here's a link) that called for Irish Cream Liquor, a special dark chocolate wafer crust, a chocolate sauce topping...and of course, was peanut safe.  Three grocery stores later and an early morning trip to the ABC store this morning, I had all of the ingredients.  I enlisted Abigail's help to crush the cookie wafers and to do lots of stirring.  We were up against the clock because the parade started at 1:00 and the cheesecake had to bake an hour and an half.  But, we did it. 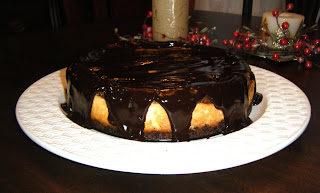 Here it is.  It's so pretty that I had to take a picture.  Frankly, I'm quite impressed with myself.  Of course I'm saying this without having tried it first.  We're going to try to work in eating a piece tomorrow between getting a Christmas tree and being at the church for an afternoon event.  We couldn't eat it tonight because it has to be refrigerated at least 6 hours after baking.  I've got candles, party plates and napkins ready though.  Can't wait to cut into it.  I just hope it tastes as good as it did in the bowl this morning.

Happy Birthday to my wonderful husband!  This cheesecake is definitely a gift from the heart!
Posted by Mom with a Mission

That looks AMAZING! I'm sure it tasted amazing too! Happy Birthday!!
xo-Susan