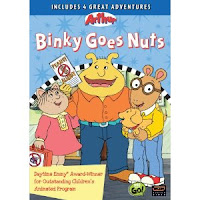 Abigail, my 3 year old son and I first previewed "Arthur: Binky Goes Nuts" back in August of last year. I was trying to determine if it was a good video to recommend to Abigail's teacher to show to her class.  I wasn't particularly impressed then, and I wanted to see if I would change my mind after seeing it a second time.

This time around, my now 3 1/2 year old, non-allergic son left the room in a panic as soon as he saw me put the disk in the DVD player. It evidently bothered him the 1st time (more on that in a minute), and he definitely didn't want to watch it again. This is from the Arthur series that runs on PBS Kids in the afternoons and is geared more towards older children.  I found a link to the full episode on YouTube.

The episode starts with Binky, Arthur's almost 10 year old friend, having signs of an allergic reaction on his skin.  Binky goes to the doctor and has skin and blood test which show that he's allergic to peanuts.  The doctor sends Binky home with lots of pamphlets and tells him that the "more he learns about allergies, the easier it is to cope with them" which is a great statement.  The episode goes on to highlight the importance of Binky reading labels, not being able to eat food he used to eat and having to sit at a peanut free table in the cafeteria at school.

Up to this point, there are a lot of good messages. I find it starts to get a little off base when Binky has a dream where he has to sit in the cafeteria at the special table with an over-the-top range of odd children.  Binky gets a cell phone so that he can call for help if he has an allergic reaction.  I'm on the fence with this particular message.  Personally, I think it is more important to teach children to find an adult for help.  I was trying to think of circumstances where Abigail, at age 9, would not be in the presence of an adult and would need a cell phone and couldn't think of any.  His mom calls him while he's in the school cafeteria (she's standing outside the window watching him eat) and there is some dialogue where mom is panicking about the sandwich he is eating.  We find out that she actually made it for him.  I guess the writer is trying to make light of us hovering moms.

Further in the episode, Binky goes to a candy store.  His mom doesn't think he's knowledgeable enough yet to make purchasing decisions, but he insists.  A friend with a milk allergy is there and she shows him some safe treats, none of which he wants.  Binky purchases cashews, eats them, and his throat starts to feel funny and he gets a rash.  He ends up back at the hospital where he has to get a shot.  The cashews were processed in a plant with other peanut products.

The scene that really bothered my 3 year old last fall and the reason he didn't want to watch it again was a dream that Binky has where he is about to get trapped in a giant peanut butter sandwich by an evil character until Super Bunny saves him.  Super Bunny's advise is to be "tougher than the allergy and let it know who's in charge."  Both my kids are pretty sensitive to TV shows so this part probably wouldn't bother most kids.  Abigail did not like it when she first saw it either.  This time she was better with the scene.

The shows ends with Binky reading all of the information that the doctor provided, doing research on safe restaurants and getting an epinephrine pen.

There were definitely some good messages woven in the program.  Back in August I decided not to recommend that Abigail's teacher use it as a tool to educate the class about food allergies.  I still think it was the right decision.  What bothered me the most is that Binky didn't have an allergic reaction to peanuts until he was almost 10 years old.  Is that possible?  My experience is with early childhood allergies. Can an allergy severe enough to result in anaphylaxis not manifest itself until a child is that old?  I would guess yes if there had been minor symptoms that were ignored prior to that age.  I did do a little research and found case after case of adults having sudden onset of severe allergies.  But, I wonder if non-allergic children watching "Arthur:  Binky Goes Nuts" would start fearing having a severe reaction due to the lack of explanation in the episode?

I guess in conclusion, I don't think there is any harm whatsoever of older, elementary school aged children watching "Arthur: Binky Goes Nuts."  If nothing else, it's a great way to open up some dialogue about food allergies.  For me, it definitely raised some questions about older children getting food allergies without prior symptoms, and I'm going to do some research.  I'll follow up and let you know what I find out.

Have you seen this episode of "Arthur"?  If so, please leave your opinions.  I'd love to hear them.
Posted by Mom with a Mission

My son hated that one as well. And for the longest time refused to watch Aurther. The dream was a bit to scary for him.
Allergy Mum - http://allergymum.blogspot.com/

Mom with a Mission said...

So, it wasn't just my kids that got a little freaked out about the dream?

Mom with a Mission