In my last post, I wrote about how, not too long ago and much to my chagrin, I was surprised to learn that the "May Contains" statement on a food package is voluntary.  As long as the Top 8 Allergens are listed in consumer-friendly terms somewhere in the ingredient list, then food manufacturers are following the laws as outlined in the Food Allergen Labeling and Consumer Protection Act.  When a food manufacturer does include information, they do so in good faith but without any type of industry standardization.

So, while us consumers who purchase food for ourselves or for someone with an allergy are very appreciative of this labeling, we are also very, very confused!  In Part 1, I discussed a recent study that found over 24 different advisory terms with the major ones being some form of "May Contains", "Manufactured/Processed in a Facility/Plant", or "Made on the Same/Shared Equipment". I posed a question to you readers. Which allergen advisory labels prevent you from purchasing a food?

A study was published in 2007 in the Journal of Allergy and Clinical Immunology regarding that very question.  At both a 2003 and a 2006 FAAN conference, participants (625 and 645, respectively) from all over the US were asked whether they heeded advisory labels, and if so, which ones.  This graph was included in a report by Dr. Scott Sicherer and presented to the FDA regarding the Use of Advisory Labeling of Allergens in Foods. 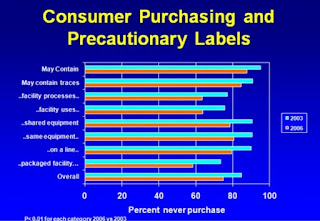 In 2006, consumers were less likely to heed precautionary warnings (75%) than in 2003 (85%).  From the graph, you can see that they are more likely to not purchase products with a "May Contain" statement than products manufactured or packaged in the same facility as products containing the allergen.  There is also caution exercised with products made on the same equipment.
As part of this study, the Department of Food Science and Technology at the University of Nebraska tested various foods containing advisory allergen labels for traces of peanuts using Veratox, a peanut allergen test.  Accordingly, peanut protein was detected in 10% (20/200) of the foods they sampled, foods such as cereal bars, snack items, frozen foods, desserts, instant meals, bakery goods and baking ingredients. They found clinically significant levels of peanut (>1 mg of peanut or >0.25 mg of peanut protein) in 13 of those 200 products.  Their conclusion was because food products with advisory allergen labeling do contain detectable levels of peanuts, a risk exists to consumers choosing to eat such foods. This is important. They found that the type of labeling statement did not influence the likelihood of finding detectable peanut (except for products listing peanuts as an ingredient).  However, as we can see from the chart above, the wording of those advisory allergen statements did influence the types of foods that consumers purchased.
In looking at another graph from that presentation to the FDA in 2008, it appears that of those 13 products that had clinically significant levels of peanut protein, 2 had a "May Contain" statement, 3 were labeled  "Manufactured using Shared Equipment" and an astounding 7 had labels stating "Manufactured in a Shared Facility."  That's huge...that's the label that many consumers think is probably okay and not so much a risk!
I know it was just one study with 200 items, and I know that everyone has to make up their own mind and follow their own gut instinct as to what they feel comfortable eating.  We've never given Abigail anything that has the word peanut on it's label unless it ends with "free" as in peanut-free facility.  This isn't a game-changer for us.  But, if I was purchasing foods that had advisory warnings and thinking some were less risky than others...than I might consider the possibility that there's a bigger risk than I original thought!
Posted by Mom with a Mission