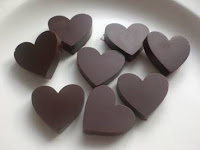 It's Valentine's Day. Time for hearts, flowers and chocolate.  Yum... chocolate...I love chocolate. I used to be a milk chocolate fan, but my husband has totally converted me to dark chocolate. I'm sure you've read this.  Dark chocolate is not only good for you, but it also makes you happy.  It contains phenylethylamine which is the same hormone triggered by the brain when we fall in love. Hard to believe that something I enjoy so much is actually good for me. It usually doesn't work that way.

And, if that is not enough of a reason to enjoy dark chocolate, how about the fact that it contains more antioxidants per 3.5 ounces than prunes, raisins, blueberries, blackberries, strawberries, raspberries, kale, spinach, Brussels sprouts, alfalfa sprouts, plums, oranges, red grapes, red bell peppers, cherries, onions, corn or eggplant.

Not all chocolate is created equal.  According to Wikipedia, usually an emulsifying agent like soy lecithin is added to create a smooth texture.  Some manufacturers are now using an artificial emulsifier derived from castor oil that allows them to reduce the amount of cocoa butter while maintaining the same mouthfeel. The more expensive chocolate tends to be processed longer and thus have a smoother texture and "feel" on the tongue, regardless of whether emulsifying agents are added.  Some mass-produced chocolate contains much less cocoa (as low as 7% in many cases) and fats other than cocoa butter. Vegetable oils and artificial vanilla flavor are often used in cheaper chocolate to mask poorly fermented and/or roasted beans.  Look for organic, Fair Trade and/or non-GMO chocolate if wanting to avoid these "extras" in your chocolate.

For those that find themselves alone on Valentine's Day, do not despair. A study reported by the BBC indicated that melting chocolate in one's mouth produced an increase in brain activity and heart rate that was more intense than that associated with passionate kissing, and also lasted four times as long after the activity had ended.  For those that aren't alone...why not enjoy them both!

Happy Valentine's Day!
Posted by Mom with a Mission