I promised Abigail that when she turned 8, she could get her ears pierced. I dragged my feet as long as possible, but finally, this last June (her birthday was in February), I surprised her and took her to Claire's. All of her visits to Duke requiring skin prick tests and blood test have really given her nerves of steel, and she didn't flinch. 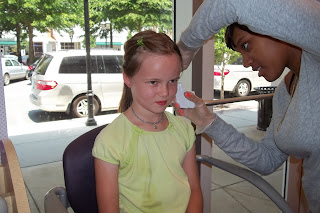 I chose the 14 karat gold earring option, she picked out the amethyst birthstones.  She was tickled and proudly showed off her new "big girl" look.

Her ears hurt.  At first, I thought it was normal.  She did a good job keeping them clean, but the holes stayed a little pink in color.  It hurt her to sleep on them, and she counted down the days till she could remove them at bed time.  After 6 weeks, we purchased sterling silver earrings so that she could start changing them.  We had a little difficulty getting the new earrings in, and they continued to ache, mostly at night, and when she pressed on her earlobes. They weren't really red or oozing significantly so I didn't think too much of it.

After 8 weeks, we felt it okay to take out the earrings and leave them out at night or for a day.  Her ears were still sensitive to touch.  She ended up taking them out and leaving them out for several days, and while you could feel a crusty substance inside the piercing, her ears stopped hurting.  Obviously, the sterling silver earrings were a problem.  I had saved 14 karat gold earrings from my childhood, and after having to re-punch through a thin layer of skin, she wore those for a couple of days.  The same thing happened.  Her ears starting aching again, and she wanted to take them out.  So, now they've been out for a week, and they are no longer sore to touch.  They are still a little crusty though.

I don't understand.  In my research, it looks like she might have allergic contact dermatitis.  What doesn't make sense though is that she wears all types of necklaces and bracelets with no problem.  Almost daily, she'll wear an inexpensive, nickel-plated necklace or bracelet to school, and she has a sterling silver cross that she wears to church.  We've never noted redness or a rash where the various chains and fasteners rub against her skin.

We haven't tried the inexpensive earrings.  It just stands to reason that if she can't wear the expensive pairs, she wouldn't be able to wear the cheap ones.  We should try them.  If those don't work, I'm afraid we don't have many more options.  I did find a brand called Concepts Earrings that might work.  I'm afraid though to even see how much those cost.

Sadly, Abigail's ears have bothered her so much, that she's no longer really interested in wearing earrings.  The pain is not worth the price of vanity in this case.  Having spent $48 to get her ears pierced, I'm not so sure I'm ready to give up on this.

Any opinions...ideas...experience?
Posted by Mom with a Mission

I'm so sorry to hear about Abigail's problems with her ear piercing. I had similar problems as a child and realized I had a nickel allergy. It's an alloy mixed in with a lot of metals (silver, 14kt gold, etc) to make them stronger. I eventually discovered Simply Whispers. They're fairly reasonable in price and have plenty of styles to choose from. Years ago our Wal-mart carried them, but I don't think they do anymore. Also, 1928 Jewelry used to have nickel free. I wear my platinum earrings all the time now and have never had an issue with them. They're my only pair, considering how expensive platinum is!

Sounds a lot like my experience as a child. My ears were very crusty. Someone suggested carbolated vaseline. It came in a brown container and I don't even know if it's still available or what the difference is, but it worked wonders on healing things. Maybe it helps create a barrier too. In my case it is a nickel allergy. Necklaces and bracelets don't bother me. I think they just move around more and have less consistent contact than an earring post. I rarely wear earrings now (busy mom to little ones), but my holes are still there and I can wear a nice pair of gold or silver earrings for a special occassion. They're just a little tender by the end of the evening. As a child my mom was able to find a few pairs of all plastic earrings that worked. I also used to struggle with watches. Mostly the clasps on the inside of my wrist. I've never tried any specially made nickel free jewelry, but I would try that or a nice classic pair of platinum earrings if you can afford it.

I cannot remember my reaction as a child, but I am 33 and I still get crusty and oozing from my ear piercings. As far as I know, I don't have any allergies to any medicines and I rotate the type of earrings I wear. I have noticed I react more to cheap jewelry, but anything can set it off and I haven't noticed a pattern. Sorry I can't be of more help!